Strange Garage Doors Stories from all over the World

So we all know what hidden gems or clutter we have in our garages but do you know what’s behind your neighbour’s garage door? We have put together some of the weirdest and strangest Garage Door Stories from all over the world, and take our word for it, some of them you really won’t believe.

The Mirror reported on the 17th January that a family were surprised to find a secret room hidden under their garage after being woken by a crashing noise in the early hours of the morning. The Bush family searched the house but couldn’t work out where the noise had come from so went back to bed. The next day one of the family members went into the garage and found a huge sinkhole had opened up in the floor, revealing a hidden room below!

“As I was pushing the garage door up, my right foot was stepping into the garage and just kept going down,” a family member told the East Idaho News.

The whole garage floor had sunk and it wasn’t just an empty room. They discovered shelving, a woman’s handbag, hair curlers, children’s toys, and an old letter from decades ago. When the family investigated the City’s property records, there was no record of the room and it was clear that when the Bush family had brought the house the real estate agent had no idea about the hidden room. The family phoned their insurance company and an engineer came out to inspect the garage and room below. The cement was just two inches thick, and he was reported to have said that he was surprised the garage floor had lasted so long. The home had been originally built in the 50s as a basement home, however, in the 1970’s someone remodelled the house and had added the second story.

The family are hoping to get to the bottom of how it all came to be and it may have an interesting history.

A couple hid their secret home with a fake garage door

A UK couple hid their secret home with a fake garage door, reported the Leicester Mercury. 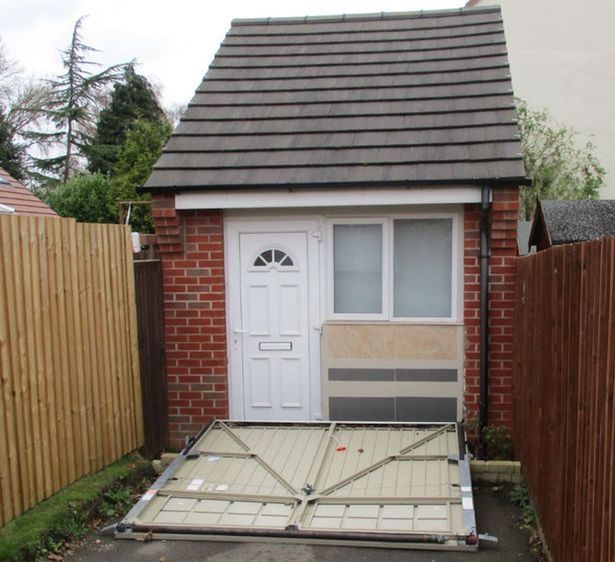 The Leicestershire couple tried to hide the fact they had converted their garage into a secret home by fitting it with a fake garage door. The false door hid the doorway and window of the new building from planning inspectors. The build had been refused planning permission by the local council, but the couple still went ahead with the development and were subsequently fined for their actions.

The development included the conversion of their garage to habitable accommodation and the erection of fencing, preventing off street parking at the property. The couple also undertook illegal work and created unauthorised vehicle access onto the busy B4114 dual carriageway. They were convicted at Leicester Magistrates’ Court for breaching a number of planning conditions after authorities caught wind of reports that the couple had been carrying out unauthorised work on the garage.

The council became aware of the breaches in October 2015 and the couple made an application to keep the works in July 2016. A 6-month appeal battle commenced which was finally heard in February 2017. After further correspondence from the council, some remedial works were undertaken by the couple in May and June of 2017, which included the removal of fencing.

Planning Officers inspected the property in the summer of 2017, however, confirmed that the garage had not been restored to its approved use and the inserted door and window was being concealed by a propped up garage door.

A final site visit in November 2017 confirmed that the required works to the garage had still not been undertaken and following this, the council sought prosecution for the offence. The couple has been issued a Breach of Condition notice and were ordered to pay a £770 fine, £1,252 in legal costs, and a £77 victim surcharge.

They now face having to return the garage to its original purpose.

The message from this case is a tough one, breaching planning regulations will be a costly mistake as most cases do not go unnoticed.

Following up on the successful prosecution, there will be a further visit from planning officers to ensure that all the requirements of the Breach of Condition Notice are fully complied with.

The new rule came about after the HOA discovered that a resident had allowed people to habitat in his garage, which is against HOA rules. As a result of this, the HOA board decided that the best way to crack down on illegal garage residency was to force everyone to open up their garage doors for everyone to see the contents.

Many residents have adhered to this new ruling, however, some have refused and are willing to pay the $200 fine.

We all know what we store in our garages and quite often it isn’t your car. Most of us don’t like to admit it, but most of us use them to store our old belongings and or valuable items. In light of this, why would you want your neighbours, or anyone else for that matter, see what you have in your garage and the clutter and chaos it may be in.

Local homeowners plan to voice their concern for this new “open-door” policy at the monthly HOA meeting happening in the next few weeks so we will wait and see who wins this one.

So the moral to this story is if you are thinking of using your garage for something you shouldn’t do, or you want to disguise a development with a garage door as you haven’t got the right permission, then think again. Remember, stick to the rules, otherwise it could be a costly mistake.